We are based on the West Coast of Puerto Rico in the town of Rincón. The waters of the West Coast are known as the Mona Passage, where the Atlantic meets the Caribbean. The fishing here is world class. ESPN's Billfish Extreme Release League rated Western Puerto Rico #3 in the world for Blue Marlin fishing. The wahoo and mahi-mahi fishing is top notch as well. Our warm, clear and blue water makes for excellent fishing throughout the whole year! Join us for a day of deep-sea fishing aboard our Contender 35T. We offer half day and full day charters, as well as tournaments. We offer trolling, bottom fishing, and live bait fishing. Our boat, FUAKATA, is a tournament rigged Contender 35T. She is rigged with twin Yamaha 250 4-Strokes which make for a quiet day of fishing. Inside the console is an electric head, which is a nice commodity for those long days offshore. There is plenty of seating in the boat. A cushioned bench at the bow which seats 2, forward of the console is another cushioned bench for 2, and the leaning post also has seating for 2 facing the spread!Blue Marlin fishingIf you would like a day of live-bait fishing, there are two 38 gallon livewells at the transom which hold plenty of live bait for a full day of fishing. There is also plenty of dry storage so you can keep your belongings safe and dry. Half Day Fishing Charters Our Half Day charters begin at 7:00 am and we fish until 12:00 pm. We are usually finished by about 1:00pm. 1 - 4 people: $575.00 5 - 6 people: $625.00 Rates include all tackle. Rates are for a maximum of 6 passengers. Gratuity for the mate not included. Full Day Fishing Charters Our full day charters begin at 7:00 am and we fish until 3:00 pm. We are usually finished by about 4:00 pm. 1 - 4 people: $850.00 5 - 6 people: $925.00 Rates include all tackle. Rates are for a maximum of 6 passengers. Gratuity for the mate not included. Also ask us about Tournament fishing and making a Reservation. Rincon Puerto Rico deep sea fishing charter Capt. Pepi Alfonso (Master Captain) was born and raised in Miami, Florida. He grew up fishing the waters of Miami as well as the Islamorada back-country down in the Florida Keys. In 1996 he received a Bachelor's Degree in Communications and a minor in Environmental Studies from Loyola University in New Orleans, LA. Later that year he relocated to Puerto Rico where he began fishing the North Coast of the island. In 1999 Capt. Pepi moved to Rincon and founded Makaira Fishing Charters. In 2004 he caught the first Tournament Grand Slam on the island (featured in Saltwater Sportsman, Feb. 2005). Recent catches include a 64 pound Mahi-Mahi. This past Marlin season, Capt. Pepi released 4 Blue Marlin on a half day charter, followed by 3 more releases the next day on another half day charter. Different species are available at various times of the year. The following is a per species list of what you can expect to catch throughout the year. Keep in mind that because of our warm waters most of the year, we can always be surprised by out of season fish! Tuna, Tarpon, Snapper, wahoo, kingfish, marlin, sailfish, tarpon, tuna Blue Marlin The Blue Marlin run begins around the June full moon through the November full moon. The best months of the season are August, September and October. Our average size Blue Marlin is usually between 150-250 pounds. There are always some 300 and 400 pounders around. Some have been caught over 900 pounds. When fishing for Blue Marlin don't be surprised to find White Marlin, Longbill, Spearfish and Sailfish. We fish for these on 30# and 50# stand-up tackle. Trolling artificial lures or ballyhoo are the most productive methods for hooking up with one these! Wahoo Rincon Puerto Rico deep sea fishing charter The Wahoo run begins in November and ends in April. The Wahoo here can range anywhere from 10 pounds to about 70 pounds. The average size Wahoo about 25-35 pounds, with several 40 and 50 pounders thrown in. Trolling for these with a little more speed seems to activate the bite. A line trolled in deep water off a downrigger usually hooks the bigger ones. We troll for these around offshore humps and drop-offs, always looking for clean, blue water. You can expect to catch Kingfish, Barracuda and Blackfin Tuna when fishing for Wahoo. Mahi-Mahi There are 2 Mahi-Mahi runs. There is one on the North Coast that runs from November through December. They are usually the smaller "peanuts" that can be found along weed lines and floating debris. The second run is on the South Coast and begins around February and ends in late April/early May. Mahi-Mahi on the South average about 20-30 pounds. You can usually pick up some 40 and 50 pounders, and don't be surprised to find 60 and even 70 pounders! You can find some on the West Coast, mainly following weed lines and currents. Tuna Tuna can be caught throughout most of the year. Our most common tuna species are Blackfin tuna, Bonita and Skipjacks. Yellowfin tuna are sometimes around, but they are not commonly found. Blackfin can get to about 25 pounds and the Yellowfin have been caught up to 80 pounds. Tuna can be caught trolling, but the most productive way is drifting over ledges and humps using live bait such as sardines. When live baiting we use spinning rods rigged with 12#, 20# and 30# line. Schools of tuna are often found around whale sharks, which is definitely a show not be missed. 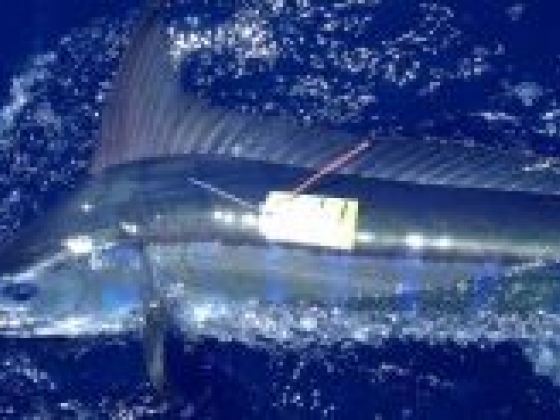 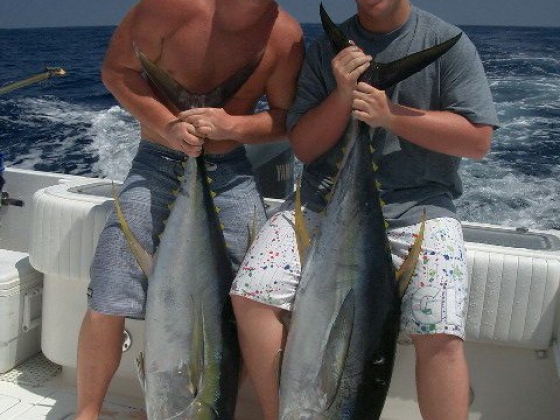 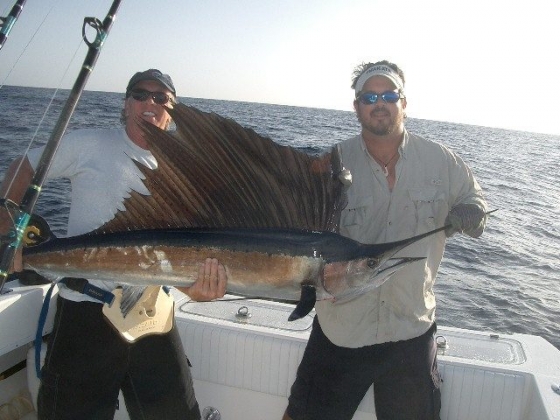 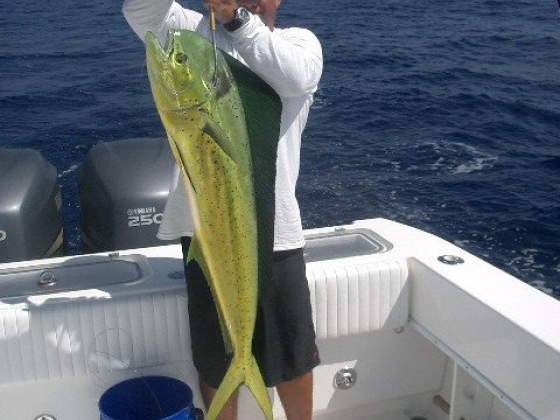